As I’m sure you’re all expecting we’ve had to cancel the rest of this seasons films, we might run them as the start of next year but watch this space as we put up new information.

We screen films to members and visitors on the first Thursday of the month from September to June at The Space – which is the new building above the library. Doors open at 7.15 for a 7.45 start. We can get quite busy and (so far) seats are on a first come first served basis, there’s no booking in advance it’s simply pay on the door (£5).

Full membership for the year is still £30, bring your cheques payable to Keynsham Film Works along on the night to speed the process of signing up, this gives you entry to all 10 films making it £3 per film. You can use pay online here using paypal if you prefer and save the paperwork 🙂

We’ve not had to turn people away yet but we’ve been very close and the numbers are rising so getting in early isn’t a bad idea.

If you’d like to receive reminders of the next film via email please join the mailing list – we only send a quick email out on the Monday before the film with details and any relevant message (like snow warnings!).

There’s a new page listing the films we couldn’t fit into next years season of 10 films here: Films to watch out for, have a browse next time you’re searching for something to watch.

We’ve set up a simple bar (run by us) that is only set to cover costs, any suggestions to improve the service greatly received! Hope to see you there and hope you enjoy the film!

Our next film is:

A group of German construction workers are sent to a remote part of Bulgaria to build a hydroelectric power station. The foreign land awakens the men’s sense of adventure, but they are also confronted with their own prejudice and mistrust due to the language barrier and cultural differences. Relations deteriorate when a group of workers led by Vincent annoy a group of women swimming nearby. The loner Meinhard is the only one to try and make friends. The stage is set for a showdown between the two men competing for recognition and favour from the local villagers. This is not at all a “western” but with references to the genre in the excellent cinematography of Bernhard Keller.

Can You Ever Forgive Me? 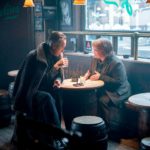